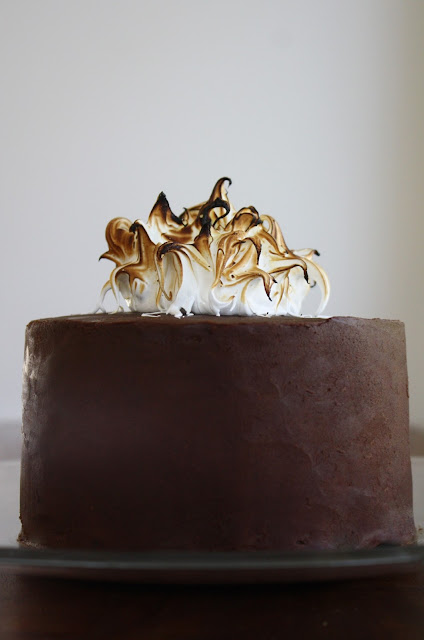 So, I’m Irish.
Actually, I’m Korirish.
Korean on my mother’s side, and Irish on my father’s.
Bit of a strange mix, to be sure.
The one thing my family has figured that the two have in common is a love of cabbage. 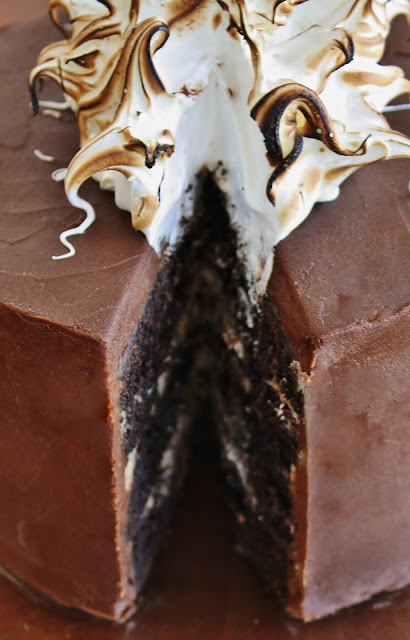 This love has distilled into my passion for cruciferous vegetables.
Cauliflower, cabbage, brussels sprouts (I’m eating some right now, actually, with apples and goat cheese), broccoli, bok choy, kale; pretty much a comprehensive list of my favorite vegetables.
Love me some Brassica.
Um, not that I’m here to tell you about vegetables.
That’s not really my shtick, at least not on this here blog. 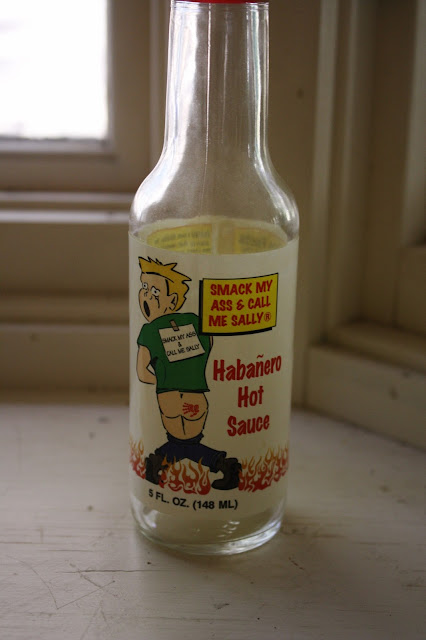 Oh! What the Koreans and the Irish also both love is beer.
(Cabbage+beer sounds like the most terrible and smelly hangover in the world waiting to happen.)
So due to the fact that St. Patrick’s Day is on Sunday and my Korean grandmother is visiting, I made cake.  With beer.
Beer cake.
With homemade Bailey’s cream sandwiched between each layer.
Yeah, it is as much of a good thing as it sounds like.
Trust me on this one. 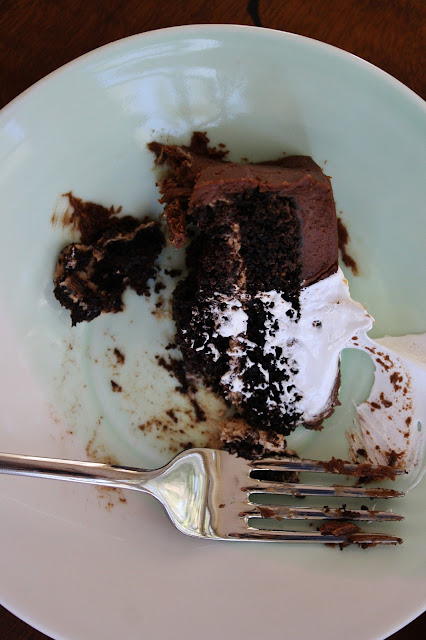 Now, it’s not the most traditional of Irish confections… But I’m certain it would be met with a hearty seal of approval in Ireland.
There’s browned Kerrygold butter, extra rich and nutty thanks to the higher fat content.
There’s Guinness, deep and dark, which adds a noticeable complexity to the cake.
There’s milk chocolate and coffee whipped cream, with a hefty dose of Bushmills whiskey.
There’s meringue, which actually is a well-loved Irish dessert.
Whether my ancestors are rolling in their graves, I know not. 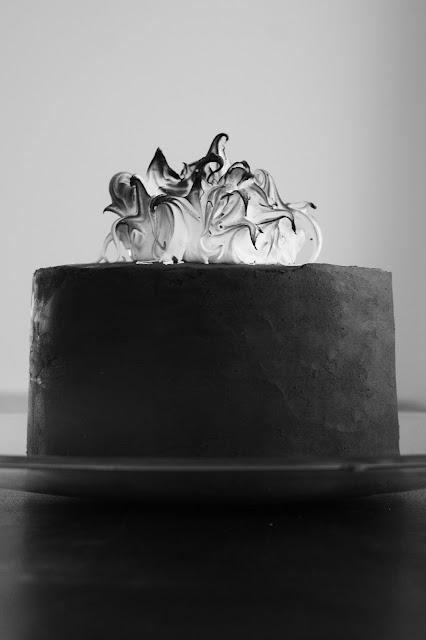 Some fun facts about my Irish side:
“Sally,” actually, saileach, means willow in Gaelic.
There’s a barren field in Ireland called the Sally Gap- real talk, I’ve even been there.
It’s full of tumbleweeds and not much else.
Super. Exciting.
In 1908, John Sally, my great-great-grandfather, and his family immigrated to America.
Yadda yadda yadda. 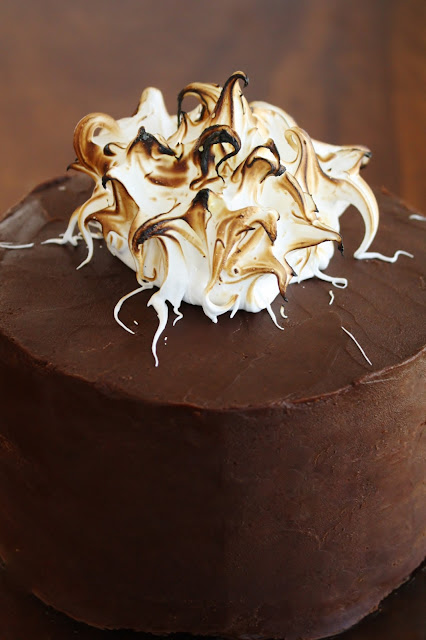 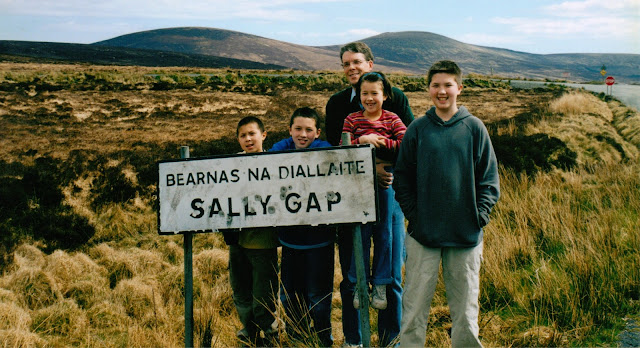 Sally Gap Cake:
for the cake:
adapted from Nigella
ingredients:
1/2 cup Guinness
5 tablespoons Kerrygold butter (or other European butter)
3 tablespoons extra dark cocoa powder
1 cup sugar
3 tablespoons sour cream
1 egg
big honking splash vanilla extract (about 2 teaspoons)
1 cup AP flour
1 1/4 teaspoons baking soda
directions:
Preheat oven to 350 degrees F.
Grease and flour two 6-inch pans (I suspect 1 shallow 9- or 10- inch would work as well, but I’m not promising anything).
Brown the butter in a large saucepot.
Once it is fragrant and nutty, stir in the Guinness.
Allow to cook for 30 seconds, then remove from heat.
Stir in the sugar and cocoa powder.
Add the sour cream and vanilla and whisk well; add in the egg while whisking.
Dump the flour and baking soda on top of the wet ingredients (flour first), then whisk them in until a smooth batter forms.
Pour into prepared pans; bake for 35-38 minutes, until risen and firm to the touch; a toothpick should come out CLEAN (this is an extremely moist cake and if underbaked will be gooey).
for the mock Bailey’s cream filling:
ingredients:
1 1/4 cups heavy cream
1/4 teaspoon gelatin
1 small bar (I used regular ole Hershey’s) milk chocolate, melted
1 teaspoon espresso powder
pinch salt
2 splashes Irish whiskey
directions:
Sprinkle the gelatin over the cream and allow to sit for 1 minute.
Mix the cream with the espresso powder and salt, and whip to stiff peaks.
Add in the whiskey and milk chocolate and mix until fluffy and homogeneous.
for the chocolate frosting:
ingredients:
4 ounces bittersweet chocolate, melted and cooled slightly
2 sticks of butter
2 cups confectioners’ sugar
pinch salt
2 teaspoons vanilla
1/4 cup cream
directions:
Put everything in a food processor and pulse until homogeneous.
for the Swiss meringue:
ingredients:
1 egg white
1/4 cup sugar
directions:
Put the white and sugar in a metal mixing bowl and place over a pan of simmering water.
Heat, whisking all the while, until mixture reaches 160 degrees F.
Remove from heat and whip on high until a stiff meringue forms, about 5 minutes.
Use immediately, as meringue will harden sooner than later.
Torch after decorating, if desired.
to assemble:
Torte the two layers; fill each with 1/3 of the bailey’s cream.
Frost the outside of the cake with the chocolate frosting; to smooth, use a warmed knife.
Mound the meringue in the center and torch it.
For the cleanest cuts, chill the cake slightly before cutting. 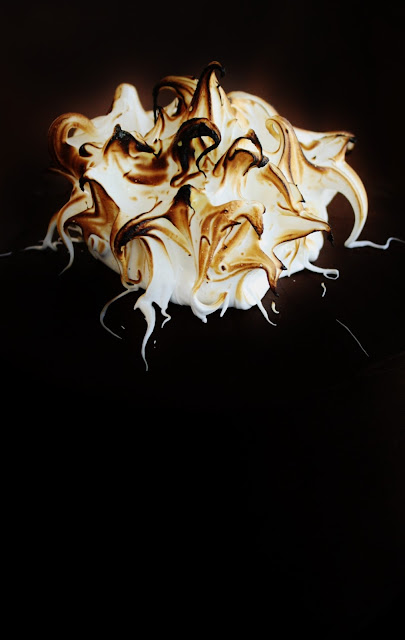