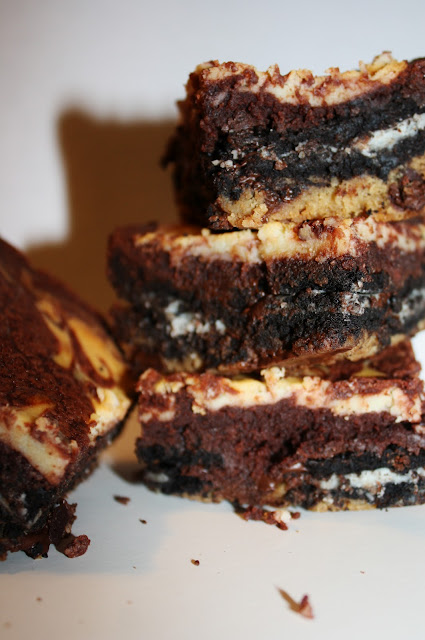 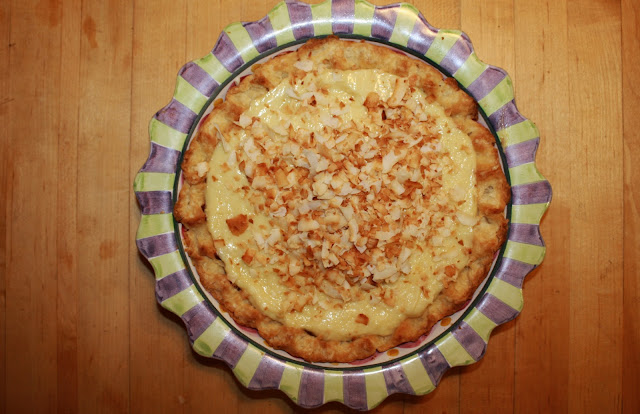 Loosen your belts, unbutton your jeans, and ready your stomachs.

Why?
Because I have two very delicious recipes today that are comprised of multiple dessert components. 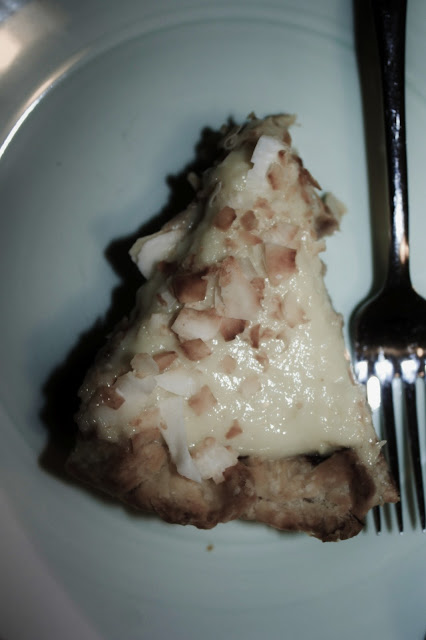 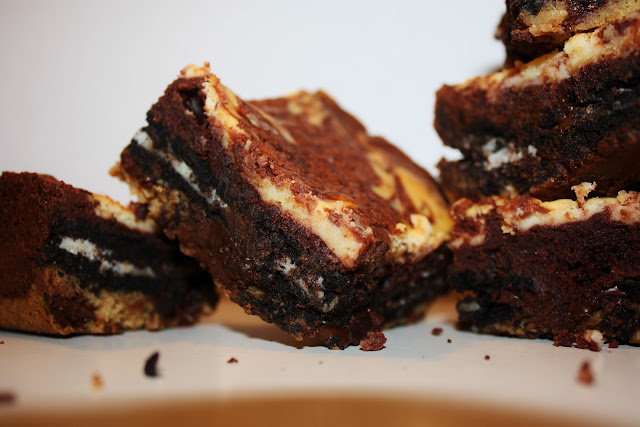 What is this brownie they are speaking of?
A chocolate chip cookie bottom, with a layer of Oreos chocolate sandwich cookies, then a layer of brownies.
Yes. Yes. YES.
But… I was sending these to my best frenemy friend, Mikala, in California.  I knew I had to ramp them up a notch.  (Surprise, Mikala! They’re on their way.)
And that is how the Super Freak Brownies were born.  So many other names were tempting me, but I’m trying to keep it P.G… Ugh.
Brown sugar blondie base… Oreos come next… Chocolate peanut butter ganache… Red velvet brownie with cream cheese swirl.
Holy $#!+ 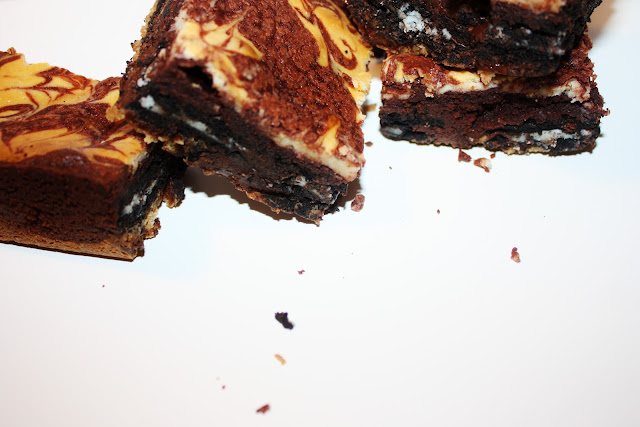 Ahem.
Now meet Frankenpie.
Or as I like to call this beaut… The Americana Dream Cream Pie. 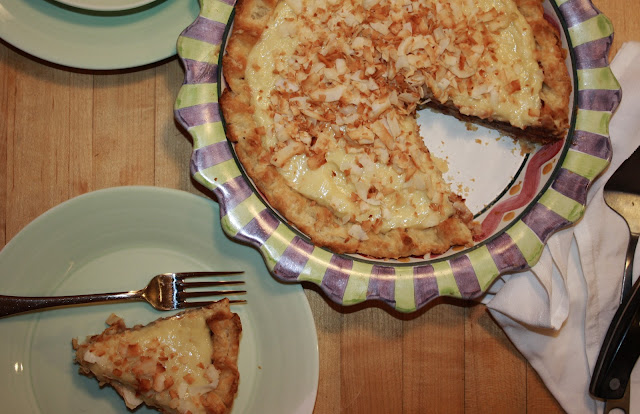 Diners across the nation have been serving hundreds of different flavors of pie for ages.  (And thank goodness for it!) 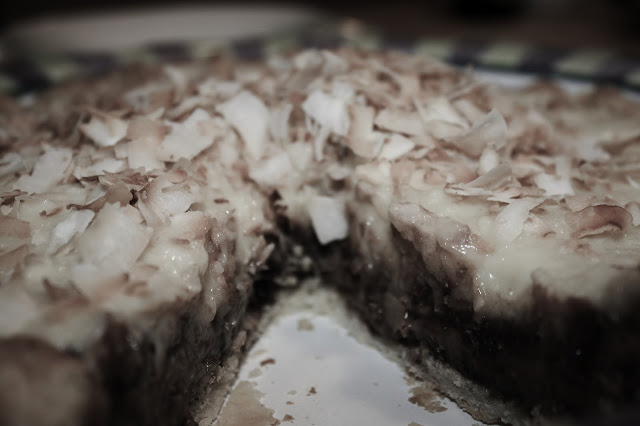 And with that, I’m hungry.  Over and out.

Super Freak Brownies
blondie layer from smittenkitchen, red velvet brownies adapted from varying online sources
for the blondie layer:
ingredients:
1/2 stick butter, melted
119 grams light brown sugar
1/2 a large egg (weigh it out, divide by two, and save the other half.  You’ll need it.)
splash vanilla
pinch sea salt
1/2 cup flour
big handful bittersweet chocolate chips
directions:
Mix the butter, sugar, egg, vanilla, and salt together.  Stir in flour, then chocolate chips.  Spread over the bottom of a well-buttered 8×8 pan. Top with Oreos. (You’ll need 16)
for the ganache:
ingredients:
big handful of chocolate chips- I used bittersweet (use your discretion on how chocolaty you want it)
1/3 cup peanut butter
directions:
Heat chocolate and peanut butter together until melted and combined, either in a microwave or on a stove top.  Spread over Oreos.
for the red velvet brownies:
ingredients:
1/2 stick melted butter
1/2 cup sugar
splash vanilla
bit of red gel food coloring
pinch sea salt
1/2 teaspoon white vinegar
2 tablespoons cocoa powder
1 egg
1/4 cup plus 2 tablespoons flour
4 ounces cream cheese, softened
1/2 a large egg
2 tablespoons sugar
splash vanilla
directions:
Mix the butter and the first measurement of sugar together with the vanilla, food coloring, sea salt, vinegar, and cocoa powder.  Next, add in the egg, then stir in the flour.  Pour 3/4 of the batter over the ganache, reserving the rest to dot the top of the cream cheese mixture.  For the cream cheese swirl, beat the cream cheese, 1/2 egg, sugar, and vanilla together, then dollop it over the brownies.  Dot the cream cheese with the remaining red velvet batter, then swirl to your heart’s content with a toothpick.
Bake at 350 degrees F for 30-35 minutes, or when a toothpick comes out clean.
Allow to cool, then cut into 9 squares.

Americana Dream Cream Pie:
ingredients:
all-butter pie dough for 1 single crust, (baked at 425 for 8 minutes lined with aluminum foil and loaded with pie weights, then at 350 without the aluminum/pie weights, but pricked with a fork, for 15-20 minutes longer, until golden) brushed with melted chocolate once cool
3 super ripe bananas
4 tablespoons sugar
2 tablespoons butter
1/4 cup flour
100 g bittersweet chocolate
1/3 cup half-and-half
1 can coconut milk
pinch salt
1/2 cup sugar
1/4 cup flour
4 egg yolks
splash vanilla and coconut extract
1 cup finely shredded unsweetened coconut
toasted chunk coconut, for garnish
directions:
Put bananas, sliced, into a pan with the butter, sugar, and flour.  Allow to cook until the mixture is thickened and very, very fragrant, about 10 minutes on medium heat.
Pour into bowl and allow to cool.  Once cool, pour into the cooled and chocolate-brushed pie crust.  Make the pastry cream:  heat up the coconut milk until simmering.  Whisk the yolks, flour, sugar, and salt together in a bowl.  Pour 2/3 cup of the hot milk over the yolks while whisking, then pour the yolk mixture back into the pan with the milk.  Allow to come to cook (it will boil and bubble) until thickened significantly.  Pour into another bowl, stir in the extracts and coconut, and allow to cool completely.  Next, heat up the half-and-half until almost boiling (I nuked it).  Pour it over the chocolate and allow to sit until the chocolate is melted, then stir until smooth.  Pour/spread over the bananas, then spread the cooled pastry cream over that.  Chill until well-set, then garnish with the toasted coconut. 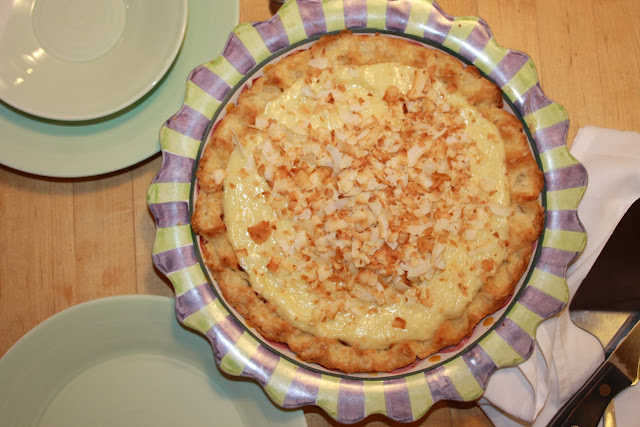