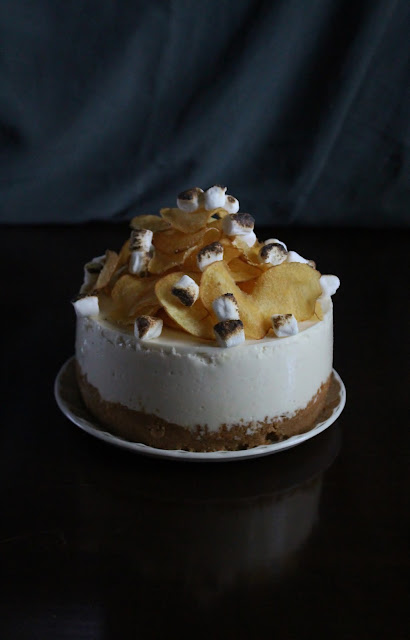 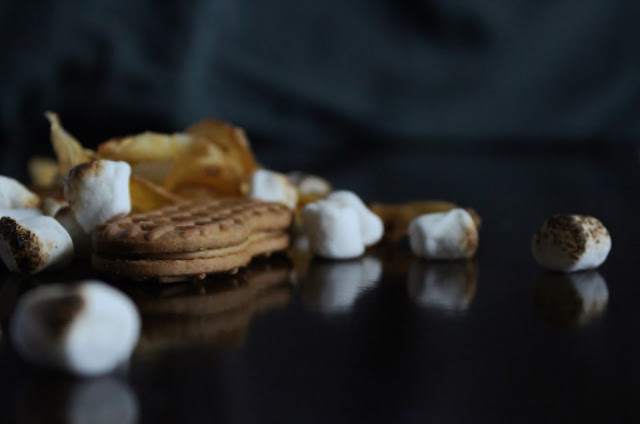 Forgive me.  This one is a mouthful, in all senses of the word.
I guess I might as well start out by telling you what you’re looking at, because otherwise I fear you may feel unsure of my sanity.
Gird your loins.
This is a vanilla bean marshmallow, Greek yogurt cheesecake with a peanut butter base, torched marshmallows, and homemade potato chips. 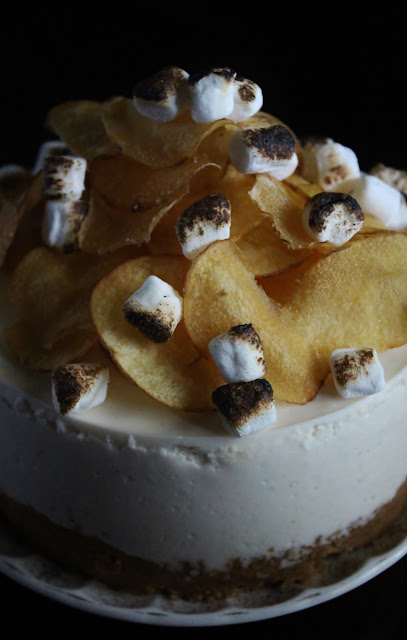 These flavors called to me as I stared at a big ole pile of homemade vanilla bean marshmallows and graham crackers that I had leftover from a picnic yesterday (I’ll share some pictures etc. in the next few days.).
I keep a running note of minute-to-minute, day-to-day, random inspirations on my phone.
It includes eclectic and esoteric things like “honey nut” and “coconut kumquat” to, lo and behold, “homemade potato chips with peanut butter- cupcakes?“
So obviously, this is not cupcakes.  But those two flavors are featured in this cake.
Victory!
Savory, fatty peanut butter combines with silky cheesecake and soft, puffy marshmallows, only to be highlighted with über crispy, salty chips. 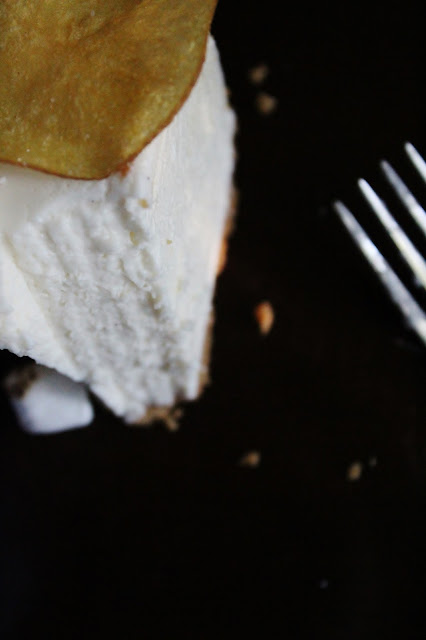 This cheesecake is a no-bake deal.  You can whip it together in 20 minutes.
It has to chill for a while, but that’s down time.
You could run errands or walk your dog or clean your kitchen (none of which I did), or drink milky green tea while watching the last two episodes of Food Network Star (cue glazed eyes), and feign sleep when someone discovers you, which I may or may not have done. 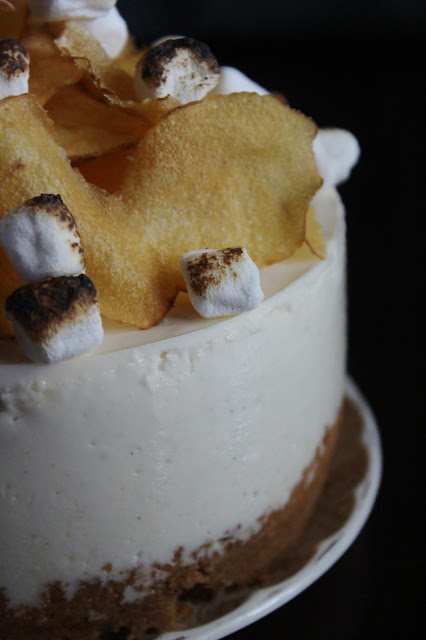 Anyways, you have some time.  A minimum of 2 hours.  So plan ahead.
The nice thing about this is that you can make this way ahead and let it hang out in the fridge before unmolding and decorating it.
I would say a full day ahead would be totally fine.
You don’t want to put the chips on too early, you little eager beaver you, because they will get soggy and limp.
Soggy and limp are not two of the adjectives I ever want to hear describing any cheesecake.
Ever.
So chill with the chips until you’re ready to serve. 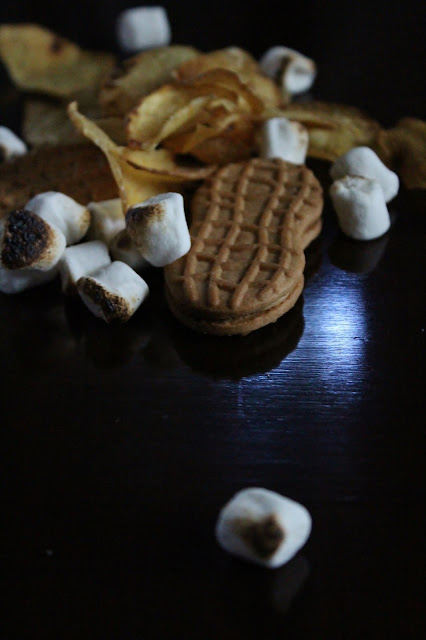 This thang is not so rich as one might think: there is no butter, only a smidgen of cream, it’s made with 0% Greek yogurt, light sour cream, and neufchâtel.
It slices very well and is light and creamy.
The textures are out of this world… I can only think of adjectives to describe this cheesecake.
I have trouble forming full, coherent sentences.
Crispy, salty, fatty, soft, creamy, silky, sweet, savory, and just a touch bitter (torched mallows). 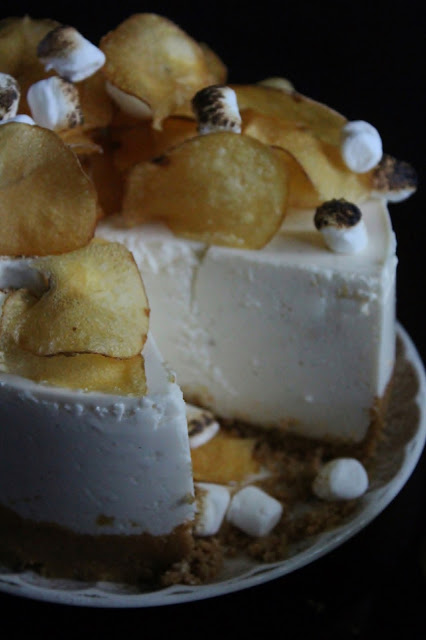 One last thing: let’s be honest,  you don’t have to make your own marshmallows and potato chips to make this cake.
(I garnished with regular mini marshmallows!)
Go out and buy a package of mini mallows and some Cape Cod potato chips and go to town.
You’ll thank me later.
(You can add in vanilla bean or extract if you use regular marshmallows.)
Also, I realize this post was all about food and kind of one note.
Never fear, I’ll be back before you even want me to be, bitchin’ and whinin’ about my life as per usual. 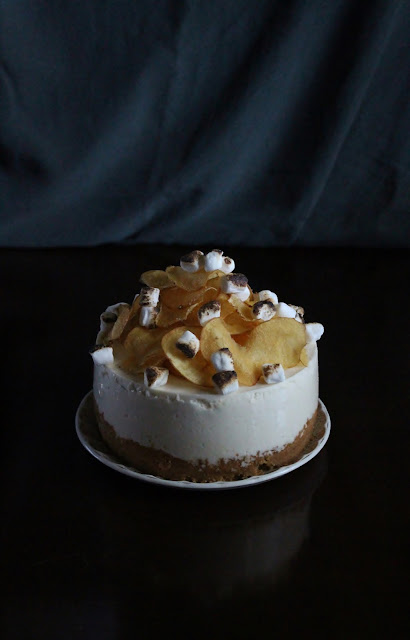 Crazed Cheesecake
(Vanilla Bean Marshmallow Greek Yogurt Cheesecake with Potato Chips and PB Crust)
makes one 6×3 inch cheesecake or one 9×2 inch cheesecake
ingredients:
3 ounces graham crackers (I used homemade, you could easily sub more Nutter Butters)
3 ounces (about 6 cookies) Nutter Butter or other peanut butter sandwich cookies (leave the filling in)
2 ounces (heaping 2 tablespoons) peanut butter
16 ounces cream cheese (I used half neufchâtel)
150 grams (3/4 cup) sugar
8 ounces (1 cup) 0% Greek yogurt
3 ounces (1/3 cup) light or full-fat sour cream
2 ounces (1/4 cup) cream
2 teaspoons gelatin
7 ounces marshmallows, melted and still warm (about 1 cup when melted)
Garnish: toasted marshmallows, potato chips
directions:
Lightly grease your springform pan (either a 6×3 or 9×2).
In the bowl of a food processor, process your cookies and crackers, leaving the filling in the peanut butter cookies.
Meanwhile, melt the peanut butter in a microwave or over a stove.
Pour the still-fluid PB into the food processor and pulse until the mixture sticks together when pressed.
Press into the bottom of your pan and place in the fridge to chill while you make the filling.
Whip the cream cheese with a stand or hand mixer until it is light and fluffy.
Add in the sugar and whip for 3 minutes.
Meanwhile, sprinkle the gelatin over the top of 2 tablespoons of cold water and set aside for 5 minutes.
To the cream cheese, add the yogurt and sour cream and beat until combined; scrape the sides of the bowl.
After the gelatin has softened for 5 minutes, add it to the cream and microwave on high until it melts, about 20 seconds.
Add the cream mixture to the cream cheese mixture and beat on high.
Scrape in the still-warm marshmallows (you may need to reheat them a bit to get them nice and liquidy) and beat on high until everything comes together.
The batter will seem a little liquidy; this is fine.
Pour the mixture into the prepared crust/pan and place in the refrigerator to set, about 2 hours.
Once the cake is set, garnish how you like.
It cuts best with a clean knife, so wipe in between cuts.