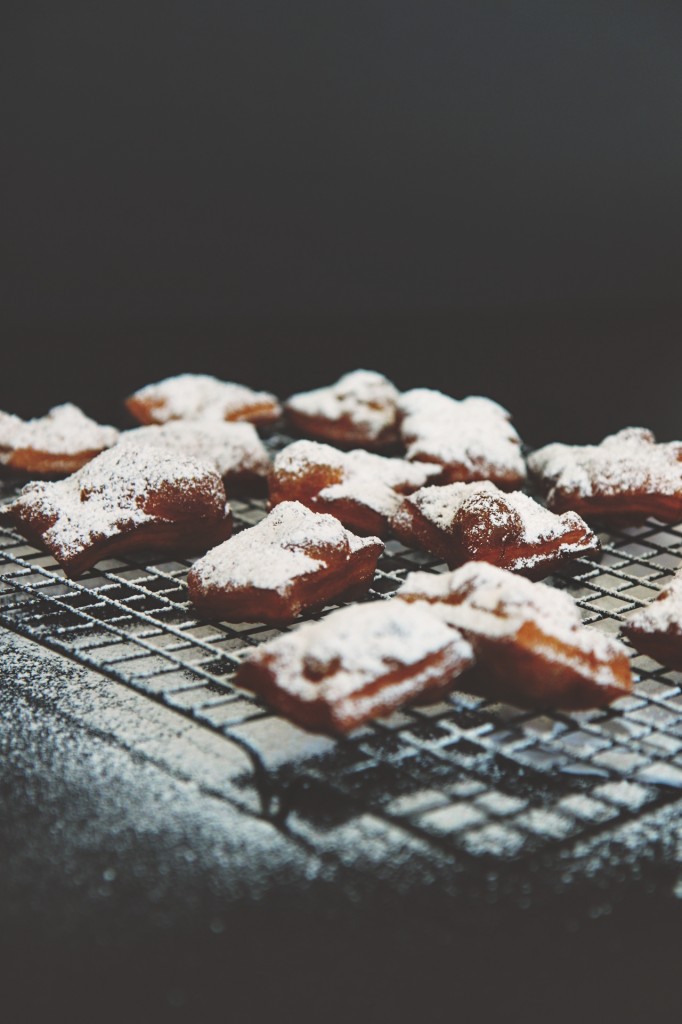 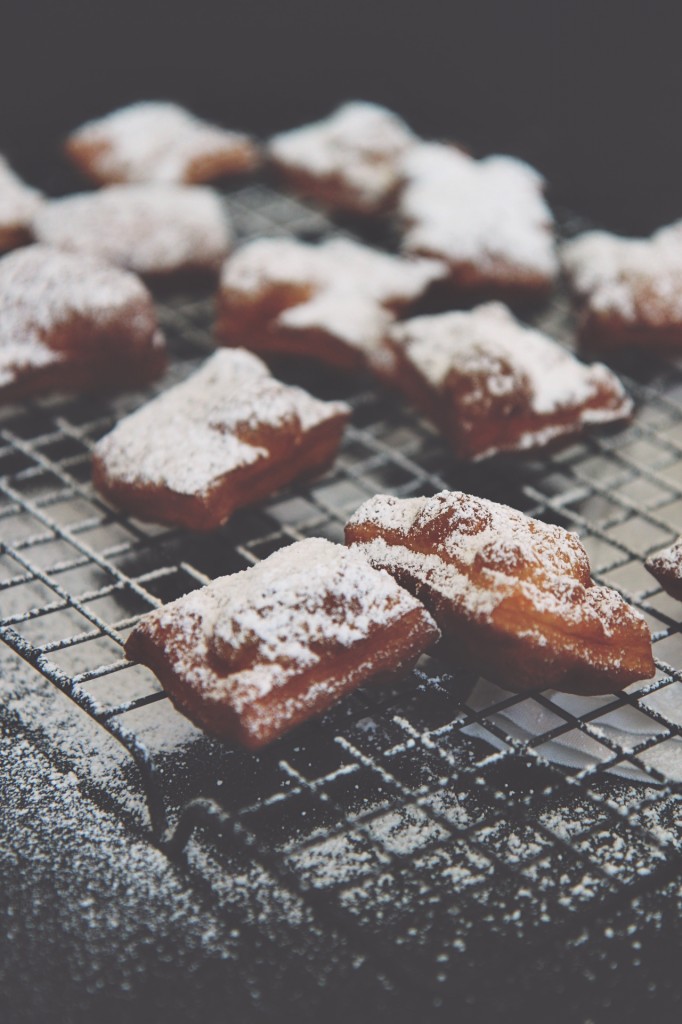 Here.  Go make these ridiculous beignets from Mandy of Lady and Pups.
I’m coughing my lungs up (don’t ask me how I’ve managed to get so freaking sick right before exams…), and don’t feel like rewriting her thorough instructions.

Next time, I’m cutting mine into rounds and filling them with custard and jam.
This batch didn’t puff up nearly as much as I wanted, which only motivates me to retest and perfect.
In fact, I might do that tomorrow.  Just another reason to save your frying oil!!
Because doughnuts.

Also, if you have to ask whether that obnoxious amount of powdered sugar is really necessary, then I’m afraid you don’t deserve a beignet.  Visit Café Du Monde and you’ll see what I mean.

Back soon with pie. Xx 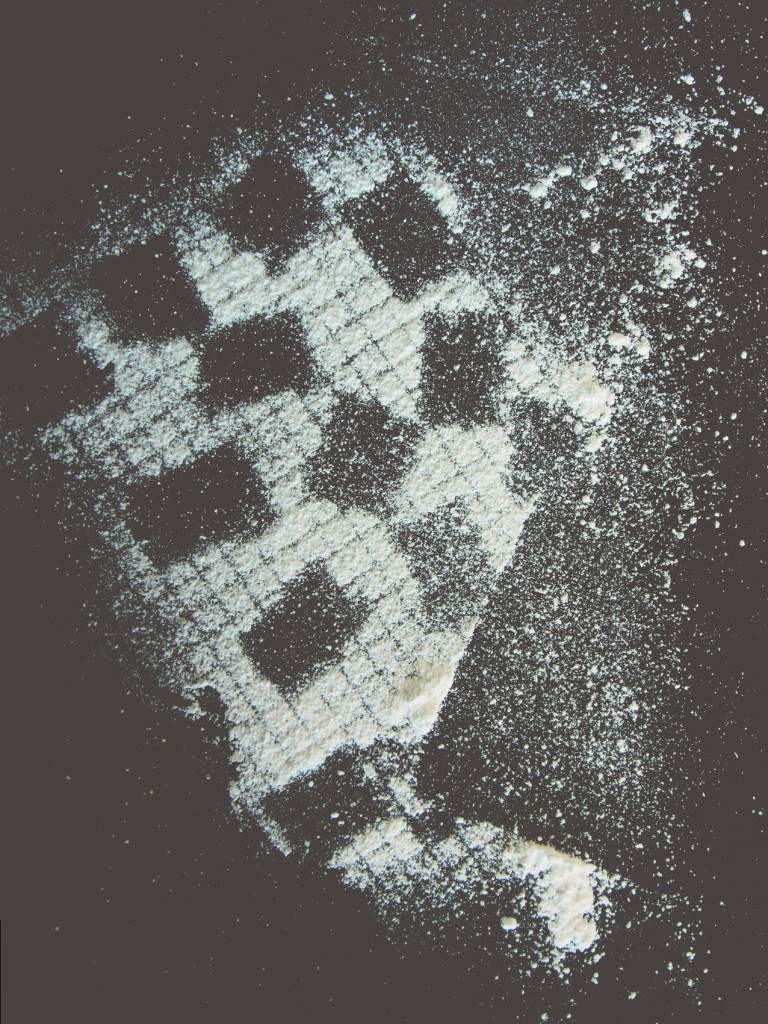 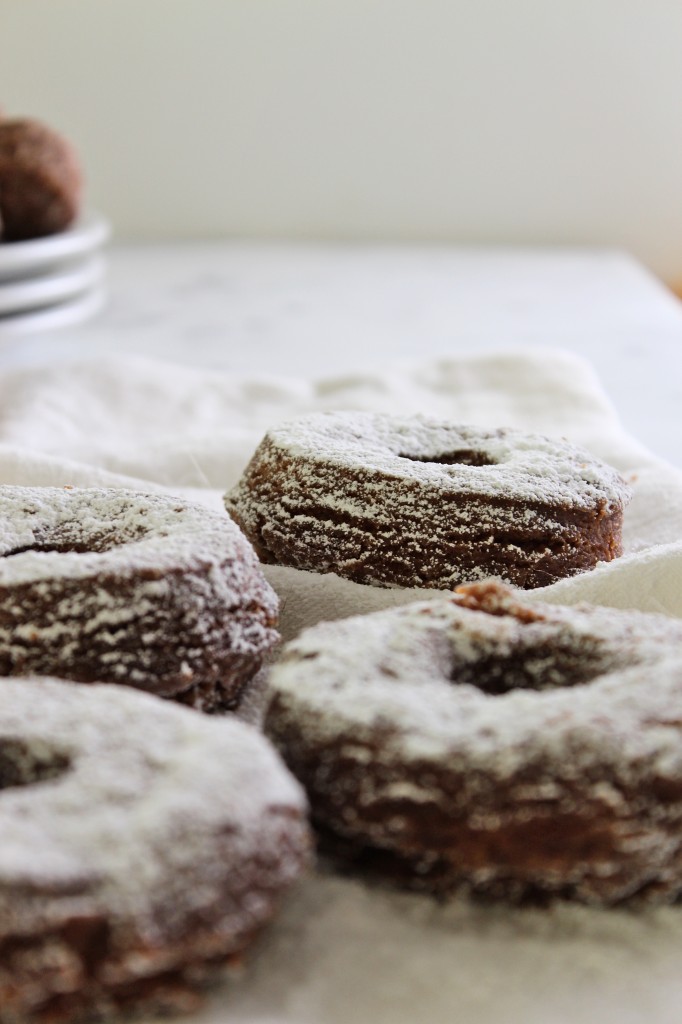 “Best of all he loved the fall
The leaves yellow on the cottonwoods
Leaves floating on the trout streams
And above the hills
The high blue windless skies
Now he will be a part of them forever.” 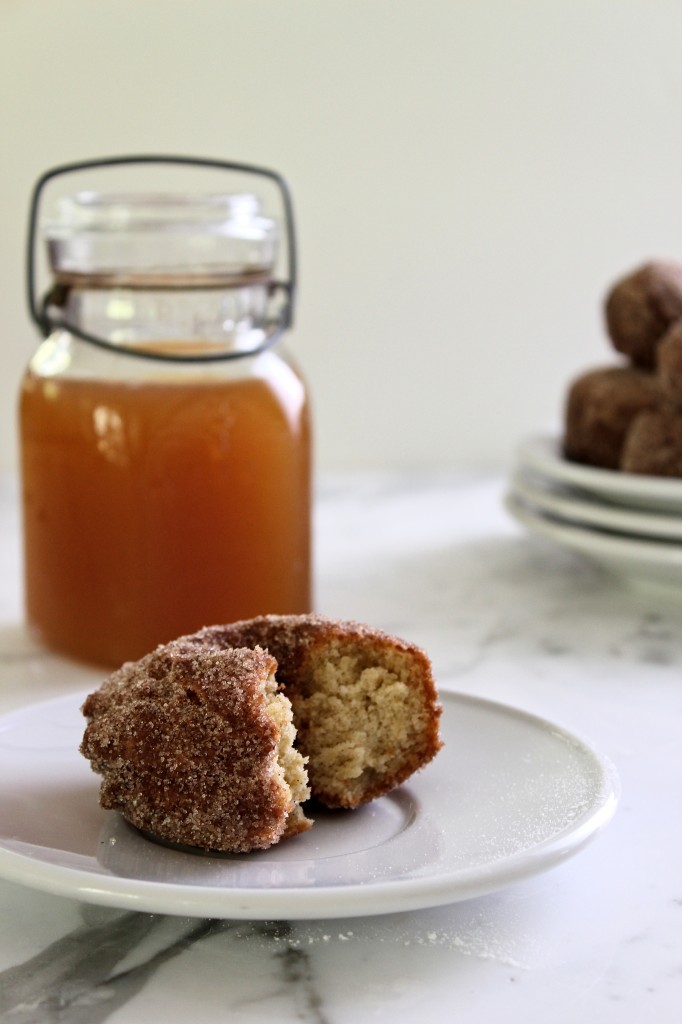 I have very distinct and fond memories of apple cider donuts.
They epitomize fall for me. 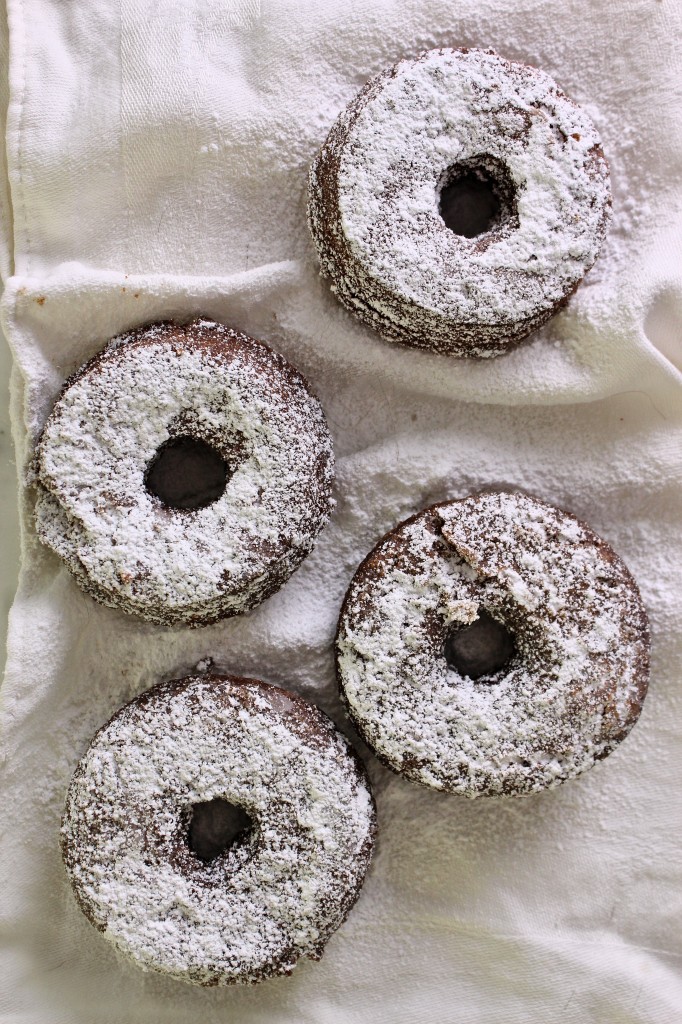 I made these donuts prior to leaving *my* kitchen for college.
Most of my posts for the next week or so will be like this… I somehow managed to plan ahead, which makes each of these posts a rare bird.
However, my first real-time, real-life, real-talk college (cawledgeeeee) post may very well be coming soon, because one of my new friends (I know… Whaaa?!?) has a birthday in a few short days and has requested chocolate cake… It may be a good excuse to get into the kitchen!
(As if I needed one.) 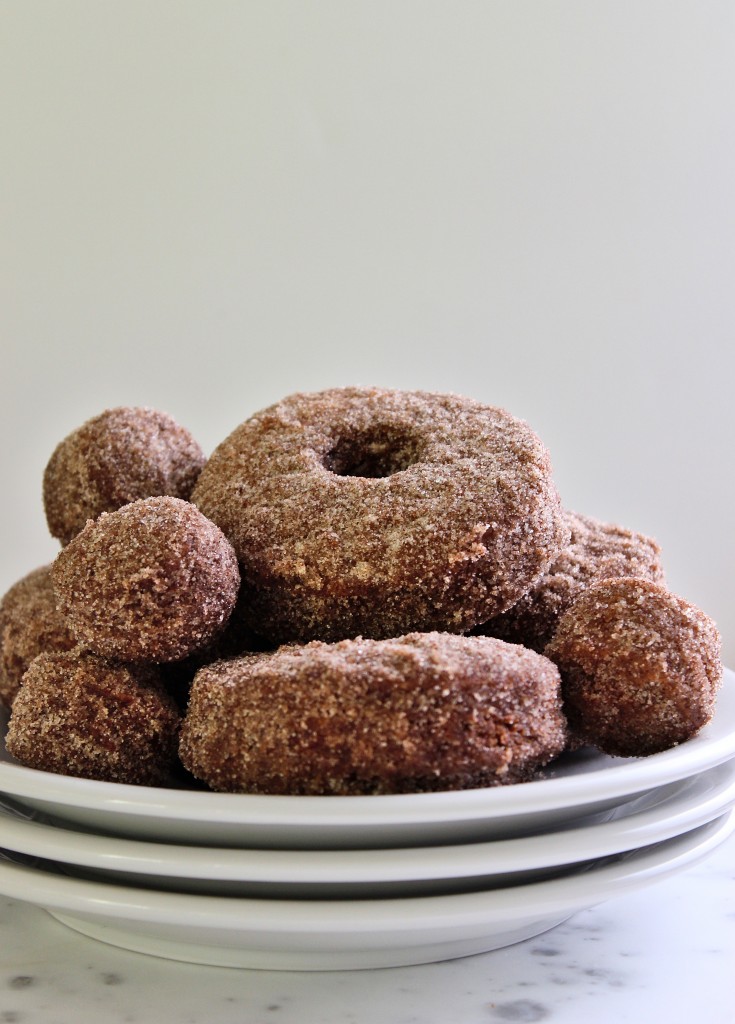 The recipe for these donuts (doughnuts?) comes from the wonderful Deb of Smitten Kitchen.
They’re a bit different from apple cider donuts that one would get at a cider mill or apple orchard, because most of those operations have donut droppers that can release a perfect donut shaped ring of loose cake batter into hot oil.
Most people at home don’t have these contraptions, so homemade fried cake donuts have to be made with a thicker dough, like an extra puffy, soft cookie dough.
Due to this fact, the donuts aren’t smooth and curvy.  They’ve got edges.  It’s okay.  It happens.
Ugly donuts are still donuts.  Trust me on that one.
They still taste like a piece of fried fall heaven. 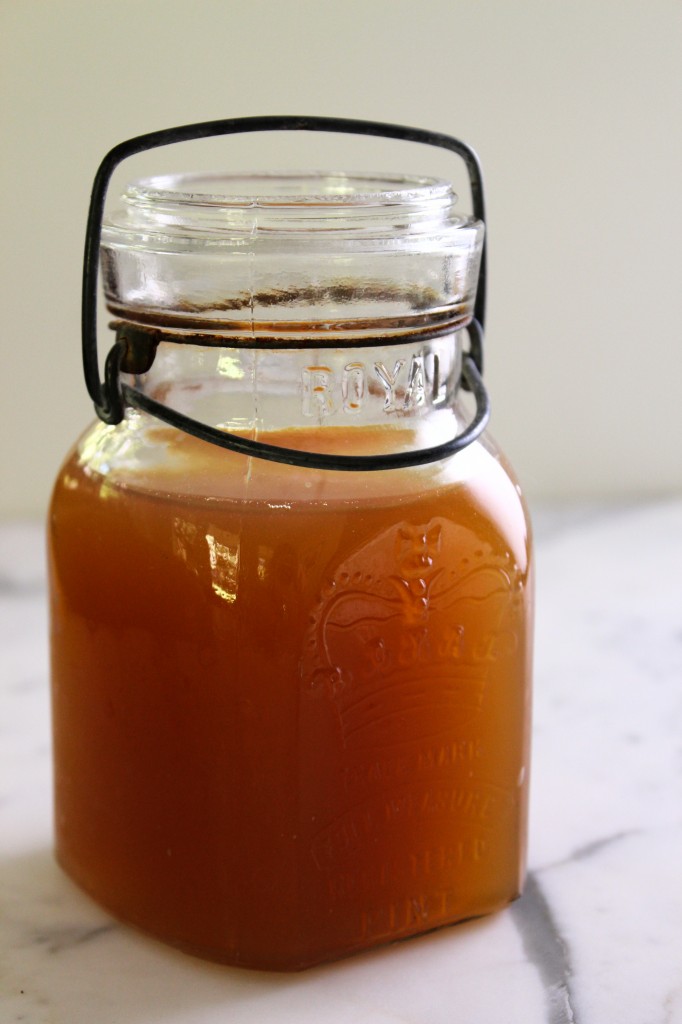 directions:
Reduce the apple cider by 4, so that you have about 1/4 cup of thickened cider, about 30 minutes over low heat.
Whisk the flour, spices, baking powder, baking soda, and salt together.
Cream the butter and sugar together until light and fluffy.
Add the eggs one at a time, then whisk the buttermilk and cider together and pour into the butter mixture.
Scrape the sides very well, and beat to make sure everything is incorporated before adding the dry ingredients in.
Mix only until the dough comes together.
Turn it out onto a very well floured and parchment-lined baking sheet and pat to a thickness of 1/2 an inch.
Freeze for 20 minutes, then cut out your doughnut shapes.
Put them in the fridge to rest while you heat the oil.
Heat the oil to 350 degrees F and line a baking sheet with plenty of paper towels.
Whisk the sugar and cinnamon together while the oil heats up.
When the oil comes to temp, fry your donuts until they are golden brown on each side, about 1 minute on the first side and 30 seconds to 1 minute on the second.
Remove them to the paper towel lined sheet for a minute or two before rolling them in the cinnamon sugar.
If you’re dusting them in powdered sugar, let them chill on the paper towels for 3 minutes before dusting.
If you don’t eat them right away, you’ll have to dust them in powdered sugar again before serving, as it will sink into the doughnuts. 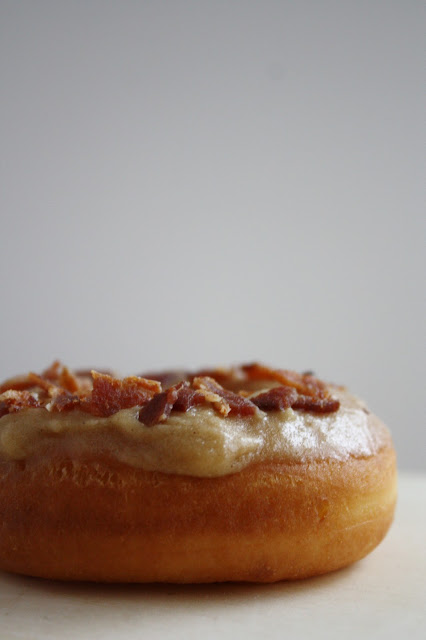 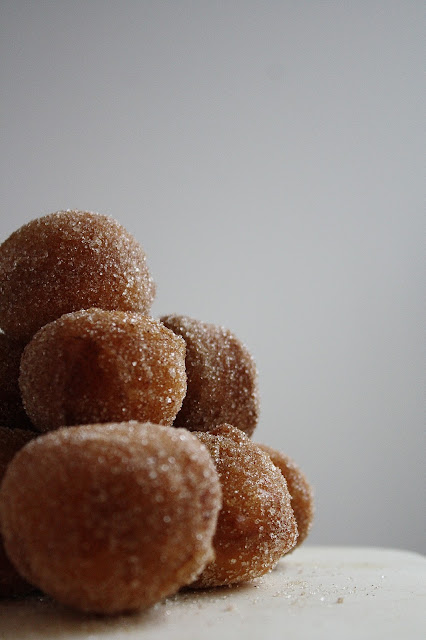 Why, yes, I done did.
Three types of donuts, in fact: brown-butter maple bacon, Vietnamese coffee (cinnamon+coffee), and cherry-chocolate. 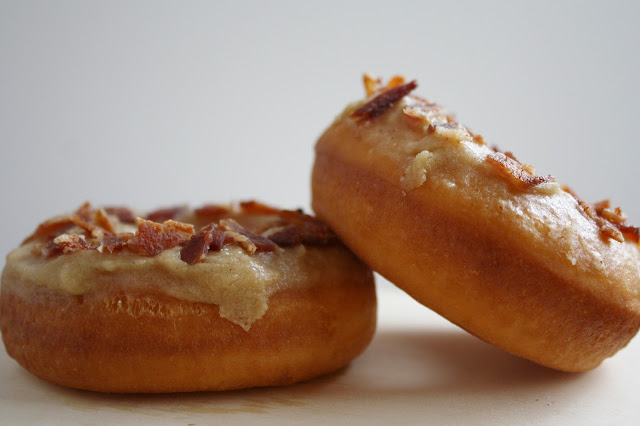 Now, I’ve always been leery of frying.  It’s a lot of hot, burbling oil, which makes me nervous.
I’ve sustained many burns in the kitchen over the years, and ones from oil splatters are the second worse, trumped only by sugar burns.
But… and this is an important but… I’ve wanted to make real donuts for ages.
I finally decided to man up and get down with deep frying, with my dearest stomach readers in mind. 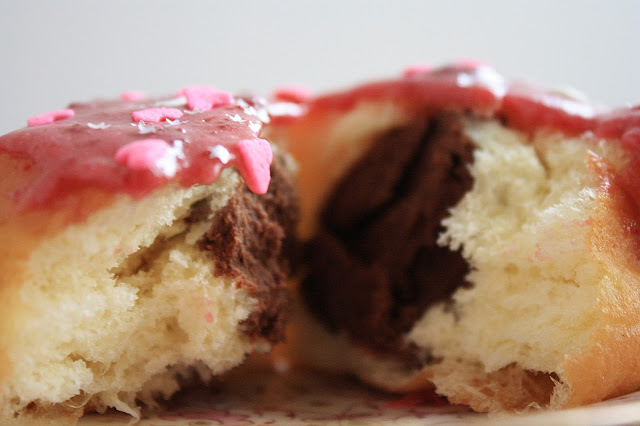 These donuts are miraculously puffy and soft little pillows of dough wrapped in just-barely crispy edges and sweet, sticky glaze.
I decided to make a decidedly clichéd maple-bacon donut, using my absolute favorite glaze of all-time… brown-butter/maple/cider.  Ohmagah.  Once all the donuts were glazed, I couldn’t help myself.  Sneak a dip, lick, repeat.  Until the bowl was almost gone and my teeth were beginning to ache.  So worth it, people.  So worth it.
The second type I made was a chocolate-crémeux filled, cherry-glazed and pink heart adorned donut.  I wanted it to be pink and include chocolate because, well, firstly, who doesn’t love cherry-chocolate, and secondly, for a Valentine’s baking article for my school newspaper.
I couldn’t just leave the poor little donut holes wallow in their teeny-tininess, could I?  So I fried those lil guys up and chucked them into a bowl of coffee glaze and from there, a bowl of crunchy cinnamon sugar. 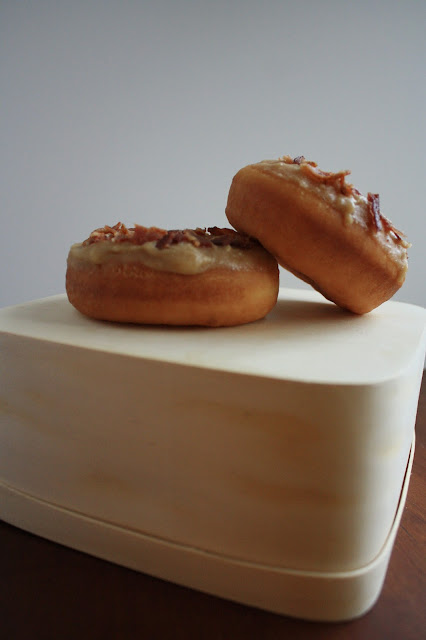 A successful morning, I’d say.  I made the dough the night before and stuck it in my fridge, and the alluring smell of donuts filled my entire house by 11:00 the next morning, rousing any and all late sleepers.  They were all gone by the next morning.
Mmmmm…. Donuts.
Yeast-Raised Doughnuts
recipe from the wonderfully decadent Pioneer Woman, Ree
ingredients:
1/2 cup plus 1 tablespoon milk, warmed to 110 degrees F
2 tablespoons sugar
1 1/8 teaspoon (1/2 a regular package) yeast
1 egg
5 tablespoons butter, melted
2 cups flour
1/8 teaspoon salt
vegetable oil or shortening, for frying
directions:
Add sugar and yeast to warm milk and allow to proof for 5 minutes.  Whisk the egg and butter together quickly to ensure that the egg doesn’t scramble.  Add the egg/butter mixture and the yeast/milk mixture to the bowl of a standing mixer (with a dough hook) and mix together.  Once mixed, add the flour in in 1/4 cup increments until all the flour is gone; add the salt sometime in the middle of adding the flour (not at the very beginning or the very end).  Knead the dough on medium-low speed for 5 minutes, then turn the mixer off, scrape the bowl, and turn the mixer on medium-high for 30 seconds.  Let the dough rest for 10 minutes, then place it in a lightly oiled bowl, toss to coat, and press plastic wrap directly onto its surface.  Place in the fridge overnight (or 8 hours).
The next morning, take the dough out and place it on a lightly floured surface.  Roll it out to 1/4 inch thickness, and working quickly, cut out as many rounds as you can.  If the dough gets too warm and begins to shrink back, stick it back in the fridge for 10 minutes.  Cut holes out of the rounds, unless you want to fill the donuts.  Place all your rounds and holes onto a parchment lined baking sheet, cover lightly with a dish towel, and let rise in a warm place for about an hour, or until the doughnuts are visibly puffy and look fluffy.
Heat 3 inches of vegetable oil in a heavy, large pot (I used my dutch oven) until it reaches 375 degrees F.
Gently place the donuts in the oil and cook for 1 minute on each side.  Remove with a slotted spoon to paper towels, and dab/blot/roll the donut around to remove as much oil as possible.  Let cool slightly before glazing.
Remember to keep checking your oil’s temperature; do not let it get over 380 or below 365.  375 is the ideal temperature.
I used this glaze for the maple-bacon donuts, and topped them off with freshly cooked bacon.
For the Vietnamese Coffee donuts:
ingredients:
1 cup powdered sugar
pinch salt
splash of vanilla extract
1 heaping tablespoon instant espresso
3 tablespoons milk, or as needed to thin
3/4 cup sugar plus 1 1/2 teaspoons cinnamon, for rolling
directions:
Dissolve the espresso into the milk.  Stir in the vanilla and salt, then whisk in the powdered sugar.  If the glaze is too thick, thin it with more milk.  As your donuts (or donut holes) cool, dunk them in the glaze, then quickly roll them in the cinnamon sugar.  You may want to wait for a few minutes after glazing to roll in the sugar, if your glaze is thin and drippy.